Humor From The Wild Side 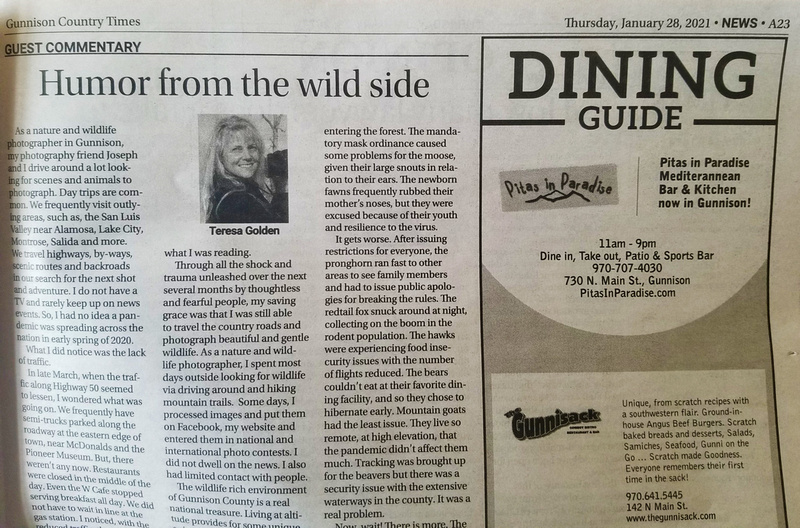 The local newspaper advertised a 'call for submissions' of stories about the pandemic to add to their annual community journal.  I came up with this short story to add to their collection.

Humor From The Wild Side

As a nature and wildlife photographer in Gunnison, my photography friend, Joseph and I drive around a lot looking for scenes and animals to photograph.  Day trips are common.  We, frequently visit outlying areas, such as, the San Luis Valley near Alamosa, Lake City, Montrose, Salida and more.  We travel highways, by-ways, scenic routes and backroads in our search for the next shot and adventure.   I do not have a tv and rarely keep up on news events.  So, I had no idea a pandemic was spreading across the nation in early Spring of 2020.

What I did notice was the lack of traffic!

In late March, when the traffic along Highway 50 seemed to lessen, I wondered what was going on.  We, frequently have semi-trucks parked along the roadway at the eastern edge of town, near McDonalds and the Pioneer Museum. But, there weren’t any now.  Restaurants were closed in the middle of the day.  Even the W Café stopped serving breakfast all day.  We did not have to wait in line at the gas station.  I noticed, with the reduced traffic, that I was not being blown away by passing semi-trucks on the highway, as I stood photographing an Eagle in a tree.  I, also, did not have people honking, while I photographed Bighorn Sheep moving across the boulders in the sage meadow at Almont.  The streets were becoming more barren by the day.  It was weird.

The small city of Gunnison was starting to look like a Hollywood ghost town.  Very few cars or ranch trucks were moving on the streets.  No one was walking their dog in the park.  Yoga classes were cancelled.  The shelves at the grocery store were becoming bare.  Hey!  What’s going on here?  Did Jesus return and rapture all the people leaving Joseph and me behind?

Luckily, for my peace of mind, the Gunnison Country Times newspaper enlightened me as to the reason behind the ‘lack of traffic.’   There was a virus spreading across the nation called the ‘novel coronavirus’ aka. COVID-19.  This was not a joke about Mexican beer (which I love).  It was a potentially deadly virus to the weak, immune deficient or elderly.  Out of an abundance of caution, cities throughout the world were quarantining everyone!  I could not believe what I was reading.

Through all the shock and trauma unleashed over the next several months by thoughtless and fearful people, my saving grace was that I was still able to travel the country roads and photograph beautiful and gentle wildlife.   As a nature and wildlife photographer, I spent most days outside looking for wildlife via driving around and hiking mountain trails.  Some days, I processed images and put them on Facebook, my website and enter them in national and international photo contests.  I did not dwell on the news.  I, also, had limited contact with people.

The wildlife rich environment of Gunnison county is a real national treasure.  Living at altitude, provides for some unique animal encounters, not to mention a closeness with nature that ‘city dwellers” drive here to experience.  We have a diverse wildlife population, which includes bear, deer, moose, cougar, pronghorn, fox, porcupine, beaver and bighorn sheep.  There is osprey, bald and golden eagles, several species of hawks and owls.  There are hundreds of water fowl and backyard bird varieties.  We are home to a rare ground bird called the Gunnison Sage Grouse, that is only found here (and has spread a little further west).  To top it off, a little known but true fact is that there are more elk than people in Gunnison county.  Needless to say, unless you are zoning-out as you drive down the road, you will most likely see birds and wildlife along the route.

It wasn’t long, though, until the reality of this pandemic really ‘hit home.’  I photographed bighorn sheep herding together in small groups, completely violating the new 6-foot Social Distancing Mandate.  Those darn bald eagles kept traveling across county lines setting themselves up for self-quarantining measures.  The thousands of elk in our county moved from their winter grounds to their summer home and the authorities were threatening to block them from entering the forest.  The mandatory mask ordinance caused some problems for the moose, given their large snouts in relation to their ears.  The newborn fawns frequently rubbed their mother’s noses, but they were excused because of their youth and resilience to the virus.

It gets worse.  After issuing restrictions for everyone, the Pronghorn ran fast to other areas to see family members and had to issue public apologies for breaking the rules.  The red-tail fox snuck around at night, collecting on the boom in the rodent population.  The hawks were experiencing food-insecurity issues with the number of flights reduced.  The bears couldn’t eat at their favorite dining facility, and so they choose to hibernate early.  Mountain goats had the least issue.  They live so remote, at high elevation that the pandemic didn’t affect them much.   Tracking was brought up for the beavers but there was a security issue with the extensive waterways in the county.  It was a real problem.

Now, wait!  There is more.  The ducks began quacking and telling the geese about the neighbors having a party at the lake, possibly spreading the virus.  The chipmunks were lining up for free fruit and nut handouts at the local picnic grounds.  The squirrels were stock-piling goods ahead of the rationing at the Super Evergreen store.  The porcupines, unsure of what to do, just stood and quivered.  The marmots groomed each other in private so, they could avoid jail-time.  The sparrows stopped singing at sunrise because large gatherings were prohibited.  And, the owls…well, they really couldn’t give a hoot.

They say, ‘laughter is good for the soul.’  I hope that my light-hearted approach using wildlife humor pertaining to this awful pandemic has brightened a very dark time in our nation’s record books.  Like the sign reads in Montrose at the ElderAdo Financial Company: “I am beginning to miss family and neighbors that I don’t even like.”

God’s Blessings to You All.