The Bighorn Line Up Story 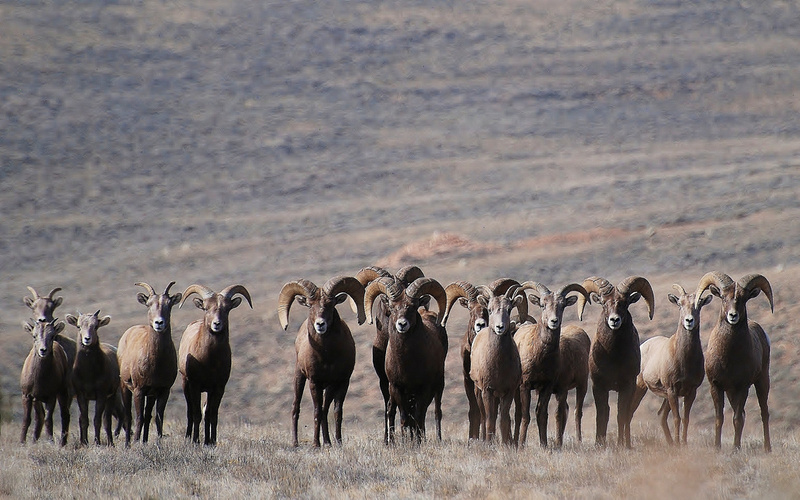 The Bighorn Line Up

(An Excerpt from my book:  Stories From Behind the Lens)

One of the first few photo adventures that Joseph, my photo partner and I engaged in took place in Saguache County near a vast open land area known as Cochetopa Canyon Recreation Area.  This canyon is quite modest in size compared to say “The Grand Canyon” in Arizona or the “Black Canyon of Gunnison National Park” 60 miles away.  However, it has steep rock cliffs of several hundred feet high, the Cochetopa river at the bottom and above it lies the cherished sage meadows for which the Greater Gunnison Basin is renowned and where we are walking on this day.

Following a road-grader down a country road, we saw a small herd of animals in the distance.  As we approached, we could see that the animals were too far away for a photo.  So, we decided to walk across the sage meadow to get closer.  Joseph had to relieve himself so he lagged behind me a short distance.

I led the short hike across the thick sage meadow that had a large dip in the middle. It was about the length of a football field.  I was very excited and focused on approaching the herd of bighorn sheep quietly.  Soon, after I reached the low point of the meadow dip, Joseph, trying to catch up began to make all sorts of noises behind me.  It was late October and although a clear sunny day, it was cool.  We were wearing winter coats.

With each step, Joseph’s arms rubbed his coat-sides making a…… SWISH, SWISH, SWISH sound.  Then, I became acutely aware of every step he took because he must have stepped on each sagebrush plant or protruding root that he encountered CRUNCH, CRUNCH, CRUNCH.  Next, he started coughing!  HACK, HACK, HACK. Ugh.  Doesn’t he know that a wildlife photographer is supposed to sneak up on the animals?  I turned back and tried to SHUSH SHUSH him but he wasn’t paying any attention to me.

Now, from this low dip in the meadow, we were unable to see the bighorns on the plateau ahead of us.  A bit disgruntled with Joseph’s racket, I figured the animals had run off and our photo op was gone.  So, I waited for him.  Attempting to be nice but hissing gently through my teeth, I tried to briefly explain the importance of being quiet upon our approach to the herd. We ascended the small hill together.

Imagine to our SURPRISE, the entire herd of 15 Rams, Ewes and lambs all lined up looking in our direction only 20 yards away. Apparently, they were wondering who or what was making all that noise and waited to see what was coming over the small hill.  I paused briefly in amazement and while Joseph fiddled with his camera, I CLICK CLICK CLICKED away taking a series of a dozen shots before the Bighorn Sheep all turned at once and ran off in the other direction.