Today, I am excited!

I have contacted US Senator Michael Bennet and requested he look into consolidating the vast recreational and wildlife viewing areas around Blue Mesa Reservoir into a new National Park, called "BLUE MESA NATIONAL PARK."  I know any government action is a long shot but one must TRY.

Not only would this action streamline the varied public lands into one, federally protected area around Blue Mesa Reservoir; it has the potential to increase needed federal funding, provide better support for recreational activities, protect the unique sage meadows of Gunnison county, provide true conservation efforts to the wildlife and habitat of this county and increase tourism to this dynamic area.

Blue Mesa Reservoir is the largest body of water in the state of Colorado.  It is 20 miles long and has nearly 100 miles of shoreline.  The surrounding areas are mostly BLM and public lands consisting of State Wildlife Viewing areas and Curecanti National Recreation Area (nearly 42,000 acres) operated by the US National Park Service.  There are about 650 miles of snow-melt streams that flow into the Gunnison river, which is the primary water source that fills Blue Mesa Reservoir.  The Gunnison river continues downstream and flows through Black Canyon National Park and eventually into the Colorado river.

Gunnison county is a rich wildlife environment full of hundreds of diverse species.  There are the larger animals such as moose, deer, bear, cougar and Yes! ... more elk than people. We have fox, racoon, coyote, soon-to-be-reintroduced wolf, porcupine, beavers, badgers and rabbits.  There are trophy trout in the streams and reservoir. We have Bald eagles, Golden eagle, several species of Hawks and owls.  There are hundreds of 'backyard' birds and several different squirrels.  At higher elevation, one can see marmots and pikas.  Gunnison county is also, home to the rare and unique Gunnison Sage-Grouse.

"Dreaming of Blue Mesa National Park" is the focus of my next gallery show at the Gunnison Arts Center this summer. 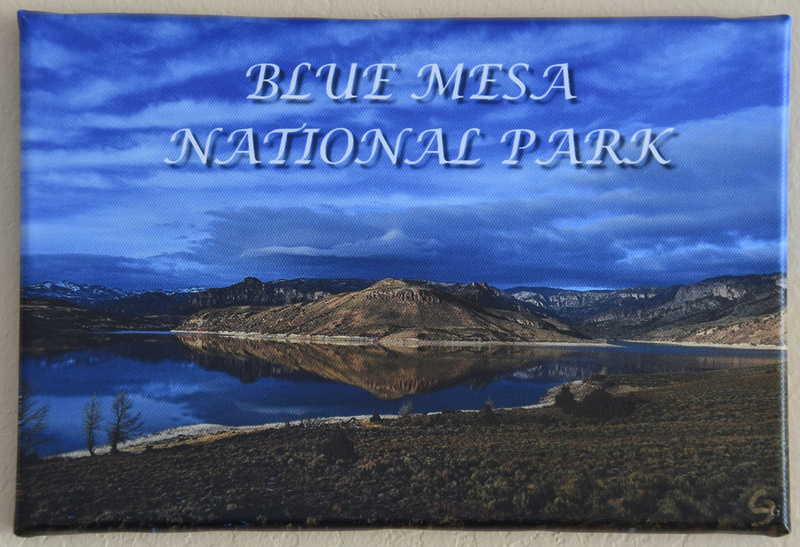